Several year ago, when my Singaporean friend was stationed in Kuala Lumpur at Al-Jazeera, I remarked that Malaysia is a very diverse country and that it is quite surprising to me that we lived in such harmony. He then remarked that Malaysians generally live in parallel realities and we don’t fully intermingle culturally. It got me thinking.

He was right. At least for me. I live a subset of a Malaysian culture: westernised Chinese. And a sub-subset of that: westernised Chinese married to a western expat. I don’t know what life is really like for the Malays, the Indians, or the Orang Asli. In fact, I can barely pretend to be fully Chinese as I don’t speak it as well as I do English.

Two years ago, I wrote a post on fasting. It was my first time thinking about what it was like to fast during Ramadan. But I was not ready to actually try it out. This year, having made more Malay friends, I started to really consider trying it out.

In the first week of Ramadan, I tried a half-day fast starting at noon after a light vegetarian snack. By 4pm, I found myself parched and weak, and was unable to focus on what my client was saying. So I broke the fast with a drink and a snack — my client was very understanding. But I still wanted to see if I could do it.

Recognising the importance of social support, I texted Muhammad earlier in the week and asked if he would buka puasa (break the fast) with me on Friday evening (yesterday). He agreed. It was a good day to try fasting as I did not schedule in any clients.

The morning began at 5:30am before the morning prayer sounded. I was not hungry. Muhammad advised that I drink something. I did, and then had some milk, granola, and a banana. Then, I set off to do some work. By 7am, I felt sleepy, and dosed off for a few hours more. The rest of the day went fairly well. This time, having done my half-day fast, I was not surprised by the weak and parched feeling that hit me by 4pm. I had finished a couple of internal meetings, so drove off from my clinic to meet Muhammad early so that I would avoid the traffic jam.

I was caught in the middle of the jam at 4:15pm! It took me one and a half hours to drive a 25-minute distance. But I did feel a kind of solidarity with the Muslims rushing home early to prepare meals for the evening.

I took the opportunity to listen to different radio stations: English, Chinese, Malay. The only stations that talked about fasting (with a lot of food and drink ads) were the Malay ones. I heard nothing about fasting in the English or Chinese stations. Another sign of Malaysians living in parallel realities?

Earlier in the week, one of my associates offered a Malay client of mine a drink. I was surprised but understood. My associate lived a parallel reality to my Malay client. The client politely declined the drink, and my associate promptly remembered and apologised. Had I not been more aware of Ramadan, I may have made the same mistake.

Muhammad took me to Kelantan Delights restaurant in Subang Jaya.

As I walked in, I felt a kindred spirit. I had fasted all day, and I was looking forward to breaking the fast. While the patrons were mostly Malay-looking, I saw some non-Malay-looking ones there too. (I say “Malay-looking” because nowadays, it is hard to tell.) People were getting their food, but no one was eating. A table full of nicely-dressed young boys around 7 years sat quietly looking at their glasses of water and juices. It was adorable! I would have taken a photo but did not want to be rude. Or come across as foreign.

(Earlier, a Malay lady asked Muhammad if I was from Japan, despite the fact that I had spoken to her in Malay!)

Breaking the fast was not so much about satiating my hunger as it was about quenching my thirst. I don’t think I have ever drank so much in any single meal! And with Muhammad’s guidance, I took it all in slowly. Here is Muhammad in red and a blurry me in brown. 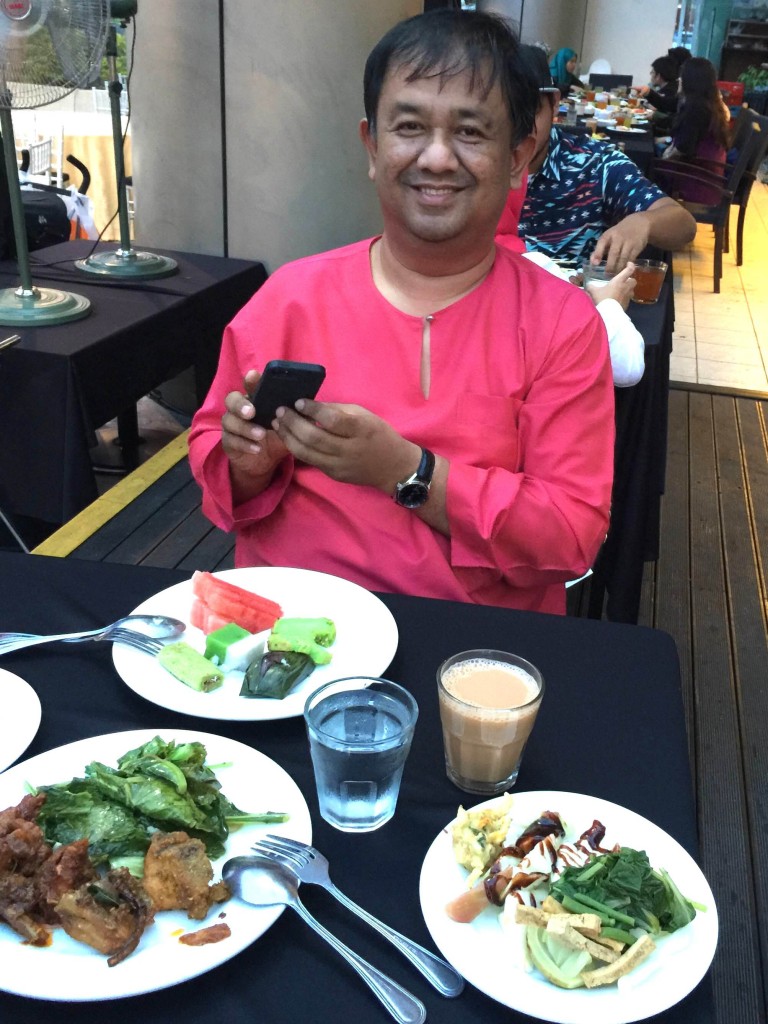 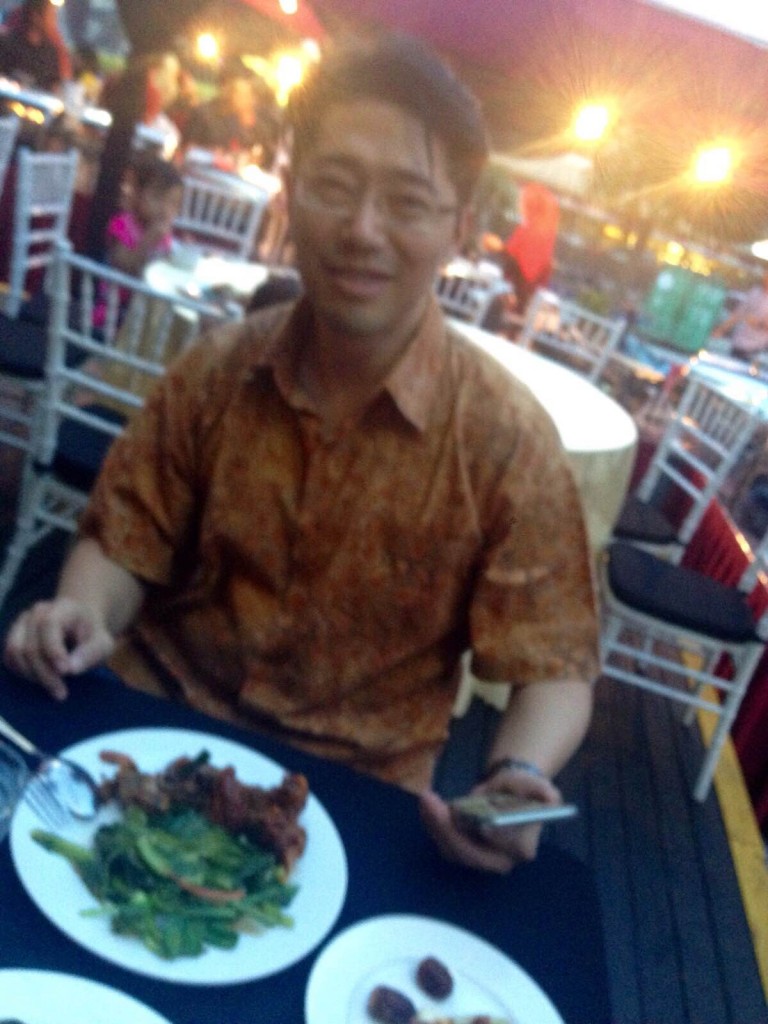 We chatted about culture, ethnicity, language, and I asked him about his experience growing up as a Malay boy attending a Chinese school. I learned new things about what it was like for him to be fasting during lunch as the minority Malay boy in school. Our primary school! I wished I had known him then, but we were never in the same classes — he was a lot smarter than I (in Mandarin) and was placed in the higher performing classes. Still, I am happy to be making a new friend who understands our Malaysian diversity a lot better than I do.

I am glad that I fasted today. I have a better understanding of what half of our population goes through each Ramadan. My empathy for Muslims has increased.

I don’t know what my little experience will do to help Malaysia become a more understanding society across races and religions, but I know it is one small step, for me. I would encourage everyone in Malaysia — nationals and foreigners alike — to try a full day of fasting this season. Making a positive change towards a loving society begins with empathy. And empathy requires us to step into the shoes of our neighbours and walk a few steps in them. Maybe then, we can speak with a little more wisdom, not judging or condemning one another for our differences, but communicating in ways that will build loving bridges towards a healthier society.

© Johnben Loy, 2015. Unauthorized use and/or duplication of this material without express and written permission from this blog’s author and/or owner is strictly prohibited. Excerpts and links may be used, provided that full and clear credit is given to Johnben Loy and www.johnbenloy.com with appropriate and specific direction to the original content.

Dr. Johnben Loy is an executive life coach, family therapist, and family business advisor. In this personal blog, he writes on topics that he finds interesting, with an aim to help people experience deeper personal awareness and improved relational well-being. To learn more about him, click here: About me.